Why We Built Our Own Outlook to NetSuite Integration 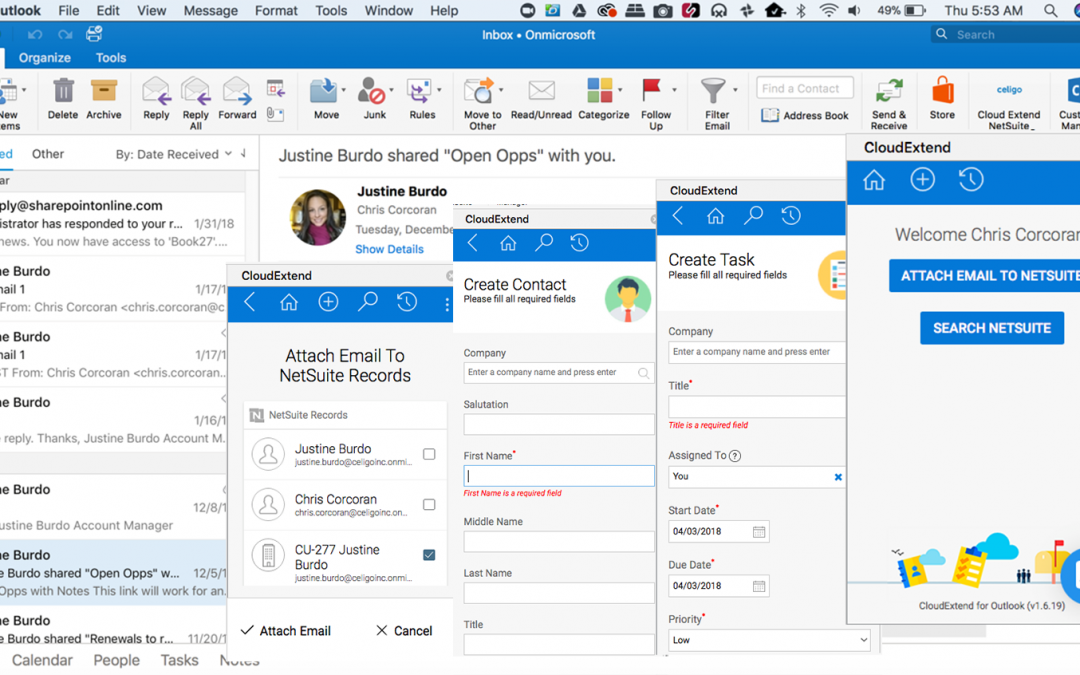 NetSuite has their own Outlook integration (and it’s free). Some might say we’re a little crazy for building our own integration. Why try to compete against free? If you’re interested in learning about the difference between the two applications you can view this brief article.

So why did we build CloudExtend Outlook for NetSuite? We’re passionate about integrations. We saw an opportunity to help tens of thousands of NetSuite users. Our team had acquired deep domain expertise building our Gmail integration. We were also involved in building the original free application for NetSuite but we did not own it. Building our own application allows us to have complete control over the design and direction we want to take.

We met with early adopters and listened carefully to their feedback. Our team also met with companies that are using NetSuite’s free solution to learn about the features they used the most (and the least). We also wanted to learn about those that were missing. This helped us prioritize our roadmap to get the most important features out first.

The ability to attach emails to NetSuite records was the most highly requested feature so we focused on delivering that. We soft-launched CloudExtend Outlook for NetSuite with no advertising in December 2017.

We had to nail our first set of deliverables

Our first deliverable was to build a UI that made attaching emails to NetSuite easy. We wanted to provide a near zero-install experience that did not require a NetSuite Administrator to install a bundle first.  Equally important was ensuring that the application worked seamlessly across multiple platforms (Mac/ PC) and on the desktop and the browser.

As the screenshot below indicates, CloudExtend automatically suggests contacts based on the sender and recipient fields in an email. This is the use case cited most often. If our user wants to attach emails to other records they can search for them and then attach. In short, we nailed our first deliverable. CloudExtend auto-suggests records to attach to

Everyone’s received an email that required just that extra amount of effort. Often they’ve left it unread to get back to later (maybe). For example, you may receive an email with new contact info (ie, phone number, or maybe you noticed a new job title on an email signature). In the past, you would have to log in to NetSuite to record these changes. Not anymore.

Our second deliverable allows our customers to “see” NetSuite in their inbox and avoid wasting time switching between applications. We also provided the ability to be able to edit select NetSuite records directly in Outlook and even create new records. When possible we’ll even auto-fill fields in the contact create form in advance.

Here’s a short (33 second) video that shows how easy it is to create a new NetSuite contact directly from Outlook.

Getting a “wow” feature ready for SuiteWorld

With thousands of users attending SuiteWorld in late April 2018, we wanted to have one “wow” feature to showcase. We met with some of the folks at Microsoft to learn about a new feature called ‘Actionable Messaging’ that allows users to take quick actions right from within Outlook. Our engineers then went and built an action that recognizes when a NetSuite user is receiving an email to approve a time entry or expense report. This typically requires that the approver has to navigate outside of Outlook to their NetSuite employee center to approve the expense or time entry wasting valuable time.

Not anymore – with our new ‘Actionable Messaging’ feature the necessary details to approve the expense report or time entry are embedded directly in the email and can be approved in one click. We’ll have this feature ready to show at SuiteWorld and available in the app shortly thereafter. Prioritizing the rest of the roadmap

As mentioned earlier, our meetings with early adopters and users of competing products really helped us learn what’s important to most customers. Here’s a shortlist of what we’re building next and our thought process behind each feature.

Our calendar integration is being built with a similar mentality as our email attachment. We’re not building 2-way sync because the vast majority of customers we have spoken with us told us they prefer Outlook to be the master because that’s where they work. When a user creates a new Calendar event in Outlook they will also be able to attach that event to a NetSuite record. The event will appear in Netsuite on the user’s calendar but it will also appear under the NetSuite record it was attached to on the Activities tab. This will then provide 360-degree visibility to customer events directly in NetSuite for anyone to see (and for sales managers to report on, a highly requested feature). It should be noted that if customers want to sync events from NetSuite to Outlook they can use NetSuite’s free ical solution.

Sales reps need to schedule phone calls with their customers. In Outlook, there is no concept of a ‘phone call’ record. Customers also told us they want to create these phone calls in Outlook. We’re building this in a way that will allow customers to work in Outlook yet also see the record in NetSuite as a phone call record under the Activities tab in NetSuite (and on their NetSuite Calendar). Users will create a new ‘event’ in Outlook and, just like our Calendar integration, they will be able to attach it to a NetSuite record. We’ll expose a radio button (create phone call) which, when checked, will transform the event to a phone call record in NetSuite.

For those customers using Office 365, we are building an integration with OneDrive for Business and Sharepoint that will allow them to attach files to NetSuite records but, instead of storing them in the NetSuite file cabinet where they take up space, we will store them in OneDrive. Further, we will allow customers to be even more efficient by attaching a OneDrive folder to a NetSuite record.  It will also allow any subsequent files attached to the OneDrive folder to then automatically appear in NetSuite.

Think of a project manager who tracks all their documents related to a project in NetSuite under the Project record. They may be working with dozens of people that are passing documents back and forth. some internal with access to NetSuite and others external without access. Instead of spending time attaching each file received to NetSuite, the project manager could designate OneDrive folders for the project and all files attached to those folders will now live with his project record automatically. The users adding the files in OneDrive do not even require a NetSuite license, just access to the OneDrive folder.

Did we mention mobile?

Almost every customer we spoke with wants NetSuite and Outlook integration from their mobile device. The small size and quick interactions make designing for mobile a challenge, but it’s one we’re up to. We’re in the early stages of designing a UI that will work from the native Outlook mobile app. Stay tuned for updates (the best way to stay tuned is to install our app for free, we send regular release notes to all subscribers).

Competing against a free product leads to many challenges in the pricing model. Our company relies on paid users of our App as a primary source of income. So, we knew giving it away for free was not an option. In the end, we decided to launch CloudExtend Outlook for NetSuite as a freemium product. This provides users with the ability to attach up to 20 emails per month and create up to 20 calendar events per month at no charge.

Advanced features such as the ability to view, edit, or create NetSuite records would require a subscription of $9.99 per month (billed annually). Our Enterprise Edition will launch at SuiteWorld. It will carry a 15 user minimum at a rate of $19.99 per month (billed annually). Because the Enterprise Edition will be lacking features at SuiteWorld we’ve created a promotional offer for customers. It allows them to get all of the benefits of the Enterprise Edition as features roll out over the first year of their subscription. This will all be for the same price as the standard edition (below).

We really want feedback from you. Please try CloudExtend Outlook for NetSuite for free. Here’s a link with installation instructions.